I received your arrows and I wanted to say how please and amazed I was. I really appreciate the information you provided: i.e. the physical weight of the shafts, the deflection numbers, all to guarantee true spine weight and matched set. I have never received such detail and care from an arrow shipment before. With this information and detail, I can trust the quality of the arrows and know that they will fly true if I shoot them true.

Shaft preparation – What happens in the shop prior to your order? 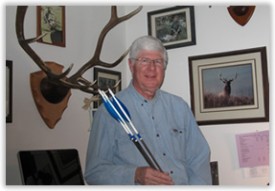 I started bow hunting and shooting competition while in high school, in the late 1950’s when virtually all archery was “traditional”. You either shot barebow (almost everyone did at that time), or with a primitive sight, but everyone shot recurves. Straight bows were mostly out of the picture because smooth drawing recurves were such a great improvement over lemonwood or hickory straight bows that stacked unmercifully. Aluminum and fiberglass were seriously competing with wood as the arrow shaft material of choice. No one thought anything about “traditional”, because that’s what everyone shot. Now we look back at those days with nostalgia, as the good old days of traditional archery.

I’ve been involved in archery clubs and archery activities my entire adult life and have hunted big game nearly every year except when a transfer by the Forest Service interfered with local hunting seasons. I’ve taken white tails, mule deer, elk, turkeys and numerous small game with a bow. My wife was my partner in all archery activities for about the first 10 years of our marriage and remained a strong supporter until she went to be with the Lord in 2019. We both shot competition quite seriously in the 1960’s and 1970’s, accumulating many local and area wins. In 1974 I accepted Jesus Christ as my personal Savior and made some significant changes in the priorities in my life, giving much more attention to spiritual things, spending much more time with my family, and discontinuing competitive archery altogether. The only exception was a shoot in 1976, where I encouraged the local club to hold a field round shoot on a Sunday afternoon, instead of Sunday morning, so that people could attend church if they wished. Since they agreed, I thought I had better support their decision, and shoot the tournament. The Lord allowed me to shoot a 556 field round (old scoring system) with target equipment I had not shot for over 2 years. It was my highest score ever. However, my heart was so changed that I felt no compulsion to pursue future tournaments, a total turnaround from my attitude just a couple of years before. Ever since, I have still continued hunting locally, wherever work assignments have taken me, and in recent years have shot more indoor and some 3D tournaments.

Over the years I have made many dozens of arrows for myself, my wife, son, and friends, and since 2007, hundreds for clients, so have experience in giving attention to the characteristics that make a quality arrow. There are many good arrow makers, producing high quality arrows, and I don’t pretend that theirs aren’t as good as mine. However, if you see something in my arrows that attracts you, I will do my best to meet your expectations.  I would be happy to hear from you!